In the early to mid 19th century the supply of drinking water generally available to the poorer classes in London was lamentably deficient both in quantity and quality, coming as it did mainly from pumps, rivers and surface wells. There was also no unified system of managing waste and as a consequence untreated sewage, rubbish and effluent from factories poured into rivers and watercourses polluting the water residents drank.  The impurity of the water was held to be largely responsible for the outbreaks of cholera in 1848-49 and again in 1853-54. Drinking alcohol was considered infinitely safer, although somewhat detrimental to overall health. 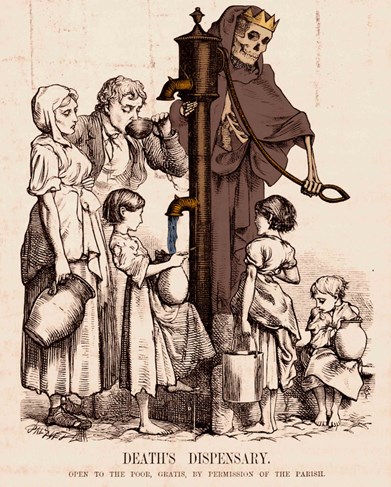 To counter this an Association – The Metropolitan Free Drinking Fountain Association - was set up in 1859 by Samuel Gurney MP a Quaker Philanthropist Banker and Edward Thomas Wakefield, a barrister to provide free drinking water in London. At the inauguration meeting the association resolved:

"That, whereas the erection of free drinking fountains, yielding pure cold water, would confer a boon on all classes, and especially the poor, an Association be formed for erecting and promoting the erection of such fountains in the Metropolis, to be styled ‘The Metropolitan Free Drinking Fountain Association’, and that such contributions be received for the purposes of the Association. That no fountain be erected or promoted by the Association which shall not be so constructed as to ensure by filters, or other suitable means, the perfect purity and coldness of the water." 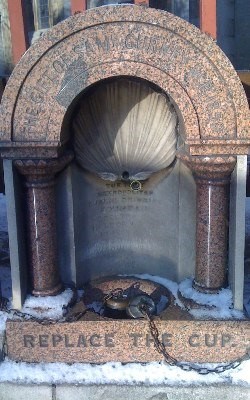 The Association changed name in 1867 to the ‘Metropolitan Drinking Fountain and Cattle Trough Association’ when cattle troughs were provided for animals brought into London for market and for the many working horses. In many cases troughs were installed at the same locations at drinking fountains. By 1870 140 Fountains and 153 troughs had been erected. 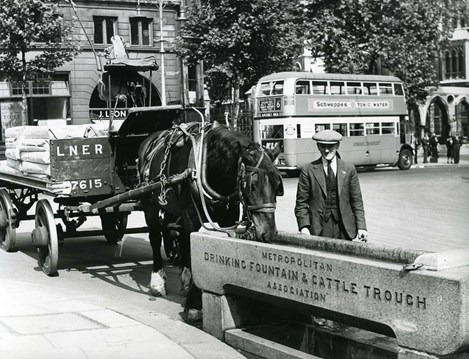 There was a strong relationship between the Temperance Movement and the Metropolitan Drinking Fountain and Cattle Trough Association in the promotion of clean water as an alternative to the alcoholic beverages drunk due to lack of accessible clean safe drinking water. An account in Punch extols the virtues of the Association ‘Theirs are fountains that work and don’t play – diminishing drunkenness, and affording pure refreshment to man and woman, boy and girl, bird and beast’ 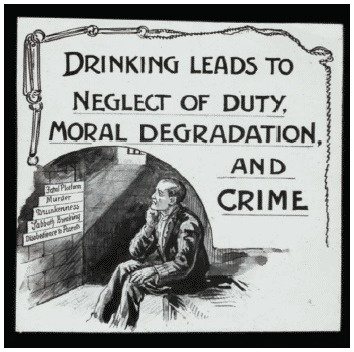 The drinking fountain at St Pancras was installed by the Metropolitan Drinking Fountain and Cattle Trough Association in 1877. It is a simple gabled Portland stone structure with an eared granite fountain niche and bowl that projects forward of the stone structure and is located towards the southern end of Pancras Road close to the junction with Euston Road.

It is part of the Grade I listed St Pancras Station and Hotel and is important both for its historic and architectural value as well as providing a valuable record of social history and the values and determination to overcome cholera and other water-borne disease which lead to widespread and premature death. 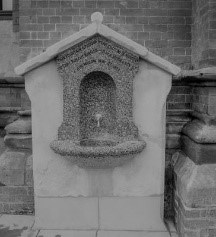 The fountain at St Pancras is dedicated to the memory of Captain Robert Hansler who died on 27th May 1877 and is inscribed thus:

Robert Hansler was born in 29th May 1811 in Westminster and baptised at St Martin-in-the-Fields.  He married Marianne Collis, daughter of Joseph Collis esq Senior Registrar of the High Court of Chancery on 1st June 1838 at St George Bloomsbury. The census of 1841 identifies the Hansler family as living in Tavistock Square, St Pancras.  Robert Hansler joined the Essex Rifles Militia as Captain in 1842 and resigned his commission in 1854.  According to the Essex Regiment records Robert took the social side of his role more seriously than his army role as he rarely appears in records of training, parades and camps but does appear in records of hunting, balls and other social events and was a regular attender of National London Militia Officers events.  There is no evidence that he saw any active service

During 2018 HS1 Ltd commissioned the repair, conservation and reinstatement of the St Pancras Station drinking fountain following a detailed survey and analysis to understand its materials, structure and history. The fountain had not been operational for many years and was in a poor state. 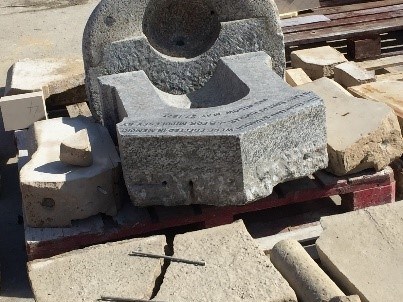 During the dismantling it was discovered that one of the pieces of the fountain was a reused headstone with the following engraving:

Late of this Parish

It is not yet known where the headstone originated from. 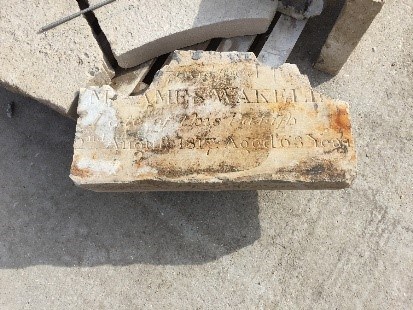 On completion of these works and the installation of a new water supply and drainage at the site the fountain was returned to St Pancras Station for re-erection, connection and operation where it now provides free clean drinking water to the public.

You can find the fountain at the southern end of Pancras Road. The Railway Heritage Trust kindly provided a grant towards the cost of the works.