St Pancras has had a long and close relationship with the brewing industry and beer consumption in London. Throughout the nineteenth and first half of the twentieth century, beer came from all over the country, and particularly from Burton-on-Trent, to supply thirsty Londoners. A major arrival point was St Pancras where beer was stored in a massive warehouse and in the vaults under the passenger station. 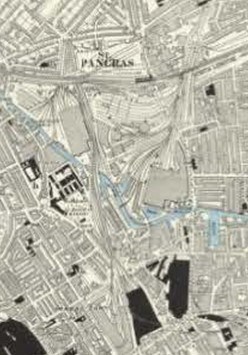 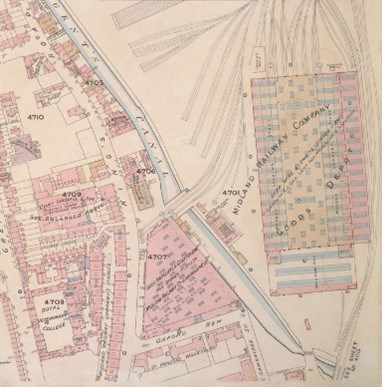 Insurance Plan of London Vol. XII showing the layout of the St Pancras Goods Station where beer was stored.  Note the Bass, Ratcliffe & Gretton  Ale Stores to the left of the Regents Canal with direct rail access. 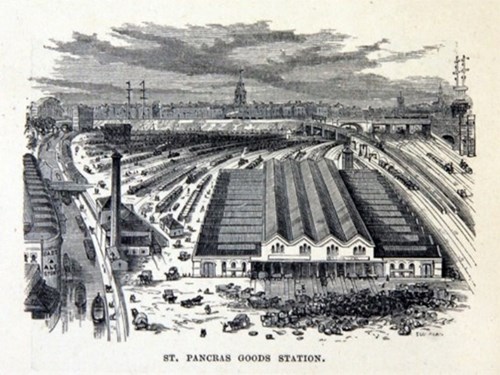 Illustration from Frederick Williams, The Midland Railway: its rise and progress (1877) Third Edition - note the beer barrels piled up at the front of the building.

Burton and the Railway

Burton’s high-quality attractive pale ales – a contrast to the darker porter beers drunk in London - were well-renowned in the 1820s and 1830s, but getting them to London was very costly and could take three weeks. The railway’s arrival in Burton in 1839 changed that and soon Burton brewers opened rail-supplied agencies nationwide and their trade expanded rapidly. Bass, a major Burton brewer, output rose from just over 30,800 barrels in 1839 to 850,000 in 1879, its biggest market being London where its beers grew in popularity. 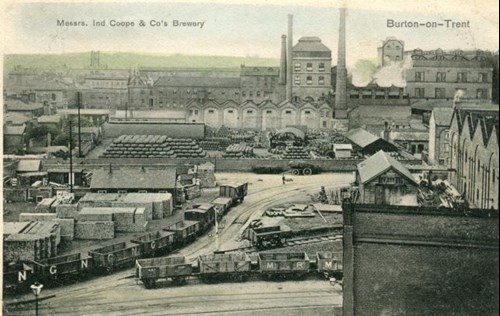 Ind. Coope & Co Brewery in Burton on Trent illustrating the close relationship of the breweries with the railway.  Note the Midland Railway wagons n the bottom of the picture 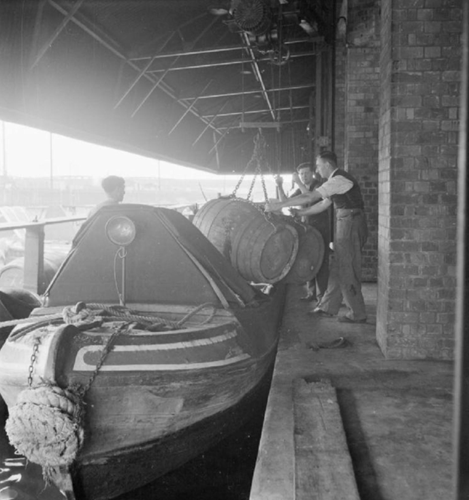 Barrels of beer being unloaded from the Grand Union Canal in Birmingham 1944. 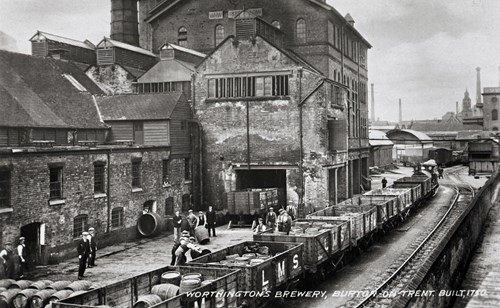 Bass and the Midland Railway

Before the late 1860s, Burton brewers supplied London by sending their beer via the Midland Railway’s competitors. However, when the Midland planned its main line to London in the early 1860s, Bass agreed to send all their beer with the company as a far as possible, for a fixed price. In return the Midland would provide “Ale Stores and Offices sufficient for the business” at St Pancras. The railway built a dedicated warehouse adjacent to the Regent’s Canal which was connected to St Pancras’s northern goods yard.  This held 120,000 barrels and employed 120 men. Bass subsequently became the world’s largest railway customer, and in 1874 it sent 292,300 barrels of beer to London, 36% of its total output.

Panoramic photograph of the St Pancras Goods Station, shown in the plans above.  Note the beer barrels and horse and dray in the centre foreground.

With tastes in London progressively favouring Burton-style pale ales, other breweries sought to capture a piece of this market from the 1830s. To secure the business of the brewers, the Midland Railway designed the cellars under the platform of St Pancras passenger station to store beer. The spaces between the columns matched the arrangement found in the warehouses of Burton, the distance of 14 feet between them being the size of multiple beer barrels. To get the beer into the cellars, beer-laden wagons were pulled into the station, then reversed onto a hydraulic lift just outside the trainshed that took them down. Below, two railway lines ran the length of the stores and there were three wagon turntables, so that wagons could be manoeuvred throughout. 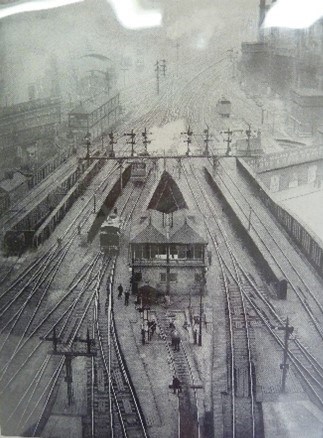 The hydraulic lift that allowed wagons of beer to be lowered from the platform level to ground level.  It is situated just in front of the signal box and a horse can be seen being led towards the platform. 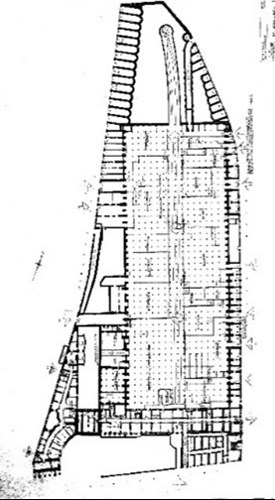 Ground level plan of the vaults below the platform illustrating the ‘ale run tunnel’ at the top of the plan and the storage area allocated to different brewers.  The black dots on the plan indicate the position of the cast iron columns that support the platforms, tracks and trains above. 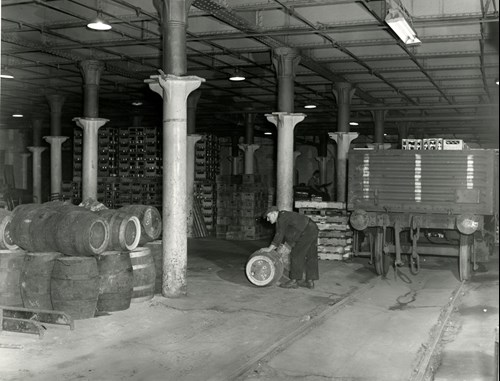 Storage of beer in the undercroft cellars.  The photograph was taken in November 1958 and shows working foreman Alf Lawrence unloading and moving barrels from a rail wagon into storage between the cast iron columns.

Activity in the Cellars

The cellars below the platforms became filled with brewers; in 1882 the Burton Brewery Company, Ind Coope & Co. and Thomas Salt & Co., which had the largest operation, were in occupation. They were joined by Joshua Tetley & Sons of Leeds, and later Marston, Thompson & Son, also of Burton. Allied trades also did business there, including beer bottlers and a brewers agent. In later years the types of businesses occupying the cellars diversified; Adams & Son, a wine and spirits wholesaler, United Glass Bottle Manufacturers and F.J. Edwards, who made machinery and tools, all took up tenancies in the 1920s and 1930s. 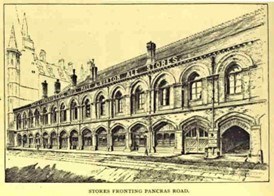 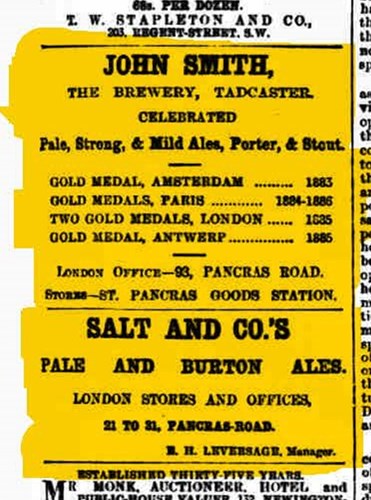 Advertisement published in the Sportsman November 6th 1889 for two breweries operating out of St Pancras Station.

Copyright: © The British Library Board.  All rights reserved.  With thanks to The British Newspaper Archive

Once beer had been unloaded from wagons, it may be stored for a while, and then it had to be distributed to the public houses and agents who supplied other retail outlets. Before 1914 this task was mostly undertaken by horse and dray teams or two men and two horse. It was hard work; dray teams would typically have a delivery route that included multiple stops within a radius of 12 miles from the point of departure and would collect empties from customers to be returned to the brewery. The working day could be 12 hours long. Bass initially stabled 36 horses at St Pancras for such operations, but increasing business meant this had increased to 100 in 1904, the stables having to be expanded several times over the decades. 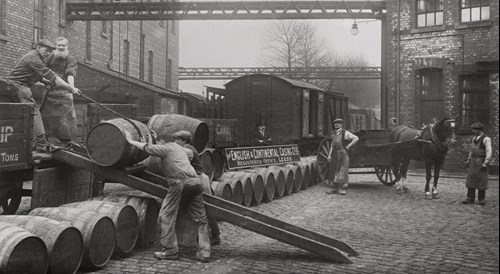 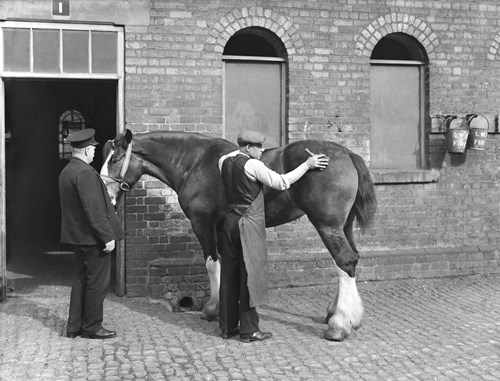 From the 1870s, growing disposable incomes and more free time led people to greater spending on consumer goods and alternative entertainments to the public house. Combined with the temperance movement’s efforts, beer consumption started falling. In response, brewers started expanding sales of bottled beers, which allowed the popular lighter beers to be stored for longer at home or taken on away-days or holidays. In the late-1870s, Bass contracted out bottling to 17 London firms; the largest was Foster & Sons at Marylebone, but it also used Read Brothers based in the St Pancras cellars. Other bottlers worked there also, such as Pocock and Pearce in the 1890s and later the London brewing company Whitbread, who claimed to be the world’s largest beer bottlers. 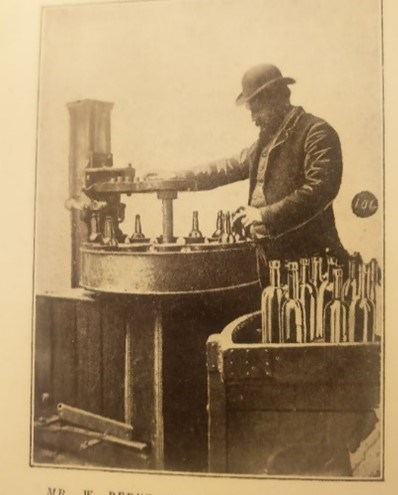 Mr W Reeve at work at one of the first power driven corking machines, c. 1880.  Whitbread Staff Magazine, ‘The House of Whitbred’, January 1924

Advertisement for stoneware jars and bottles from a Derby based company with offices at St Pancras Station.  Lloyds List, Monday, January 12, 1880

Copyright: © The British Library Board.  All rights reserved.  With thanks to The British Newspaper Archive

Before 1914 brewers nationwide started experimenting with steam and petrol motors lorries. They were frequently cheaper to operate than dray teams, and offered more flexible, cheaper and secure transport than rail, given beer, barrels and bottles often suffered damage, delay and pilferage in transit. One early motor was to be seen at St Pancras, Bass employing a 5-ton Ryknield petrol van in 1905 on deliveries. After 1918, as breweries faced diminishing beer consumption, and merged to secure economies and expand their distribution networks, they progressively adopted lorries as their reliability and ranges increased. This affected the railway’s beer trade; in the 1950s only a quarter of the St Pancras’s vaults were used by brewers, although Bass still relied on the railway. The end was close though. By the mid-1960s, beer traffic to St Pancras had ceased, and Burton’s brewery railways had closed. 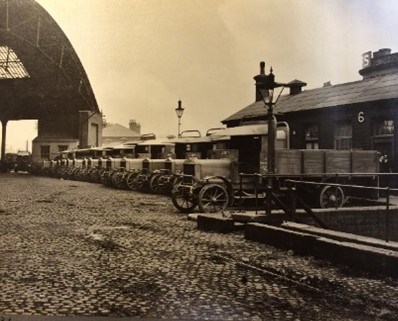 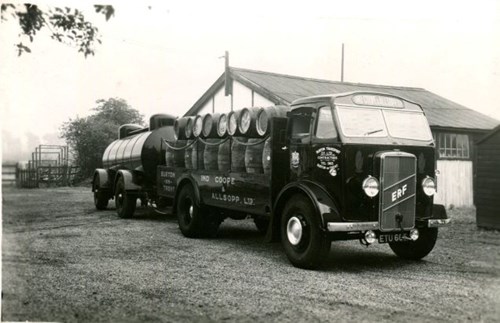 To celebrate the Station’s rich association with beer, St Pancras International launched its 150th anniversary year in 2018 with a new beer announced in tradition style with a horse and dray.

Research conducted in association with Dr David Turner, University of York and part-funded by the Business Archives Council