St. Pancras Trees of Christmas Past

As we gear ourselves up for the unveiling of the station's 2019 Christmas tree, we can't help but dust off our photo archives and take a trip down Christmas memory lane.

In 2013, Fortnum & Mason opened their St. Pancras store; their first new shop in the UK for more than three centuries.

Fortnum's St Pancras opened on the main concourse, designed to serve the country's travellers. Unveiled by intrepid traveller Sir Ranulph Fiennes, Fortnum's St. Pancras quickly became the perfect place to enjoy a cup of tea, a glass of wine or a light meal at the beginning or end of a journey. So is there a better way to celebrate an opening year at St. Pancras than designing our Christmas tree?

Christmas 2014 was a year of fantastic French festivity; Raymond Blanc OBE turned on the lights to the station's Christmas tree, which was sponsored by Eurostar as part of their 20th birthday. The tree itself celebrated the station’s amazing international connections by highlighting hundreds of Christmas inspired markets across Europe. 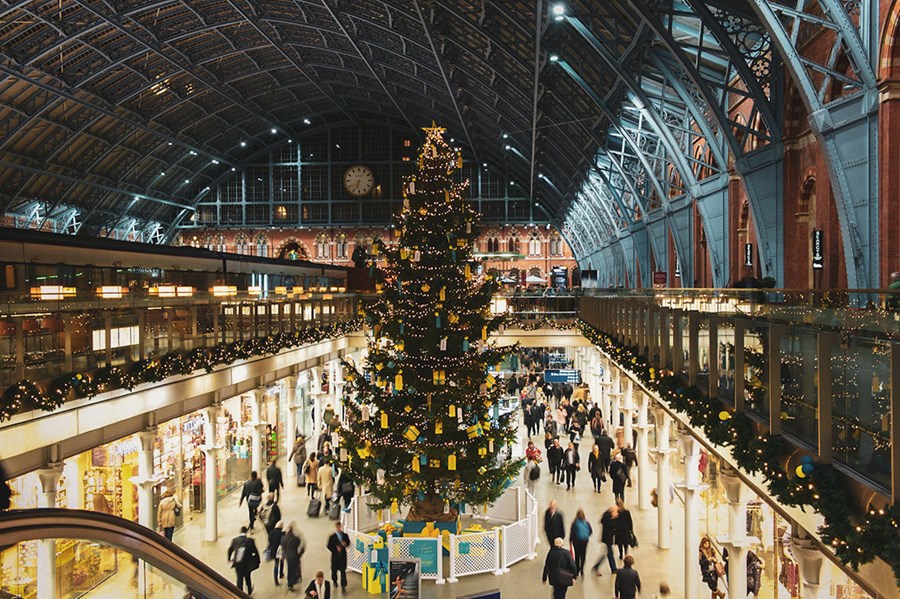 Singer, TV presenter and Britain's Got Talent Judge, Alesha Dixon, unveiled the world’s biggest Disney Junior Christmas Tree at St. Pancras, created entirely from Disney soft toys and with Mickey Mouse at the top, bringing the magic of Christmas to commuters and families.

But the magic didn't end there! Our spectacular 14-metre high tree was brought to life with snowflakes magically falling from the top of the tree every four minutes, the snowflakes were specifically designed to dissolve as they reach the ground without leaving a trace. 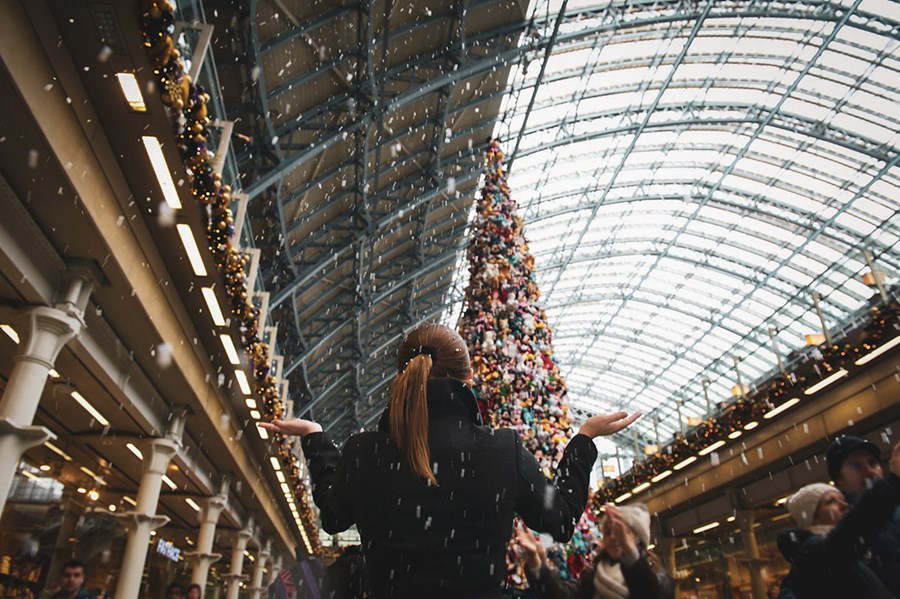 The magic continued long after the tree was taken down as the 2,000 soft toys provided by The Disney Store were donated to KIDS, a leading charity which cares for disabled children, young people and their families. 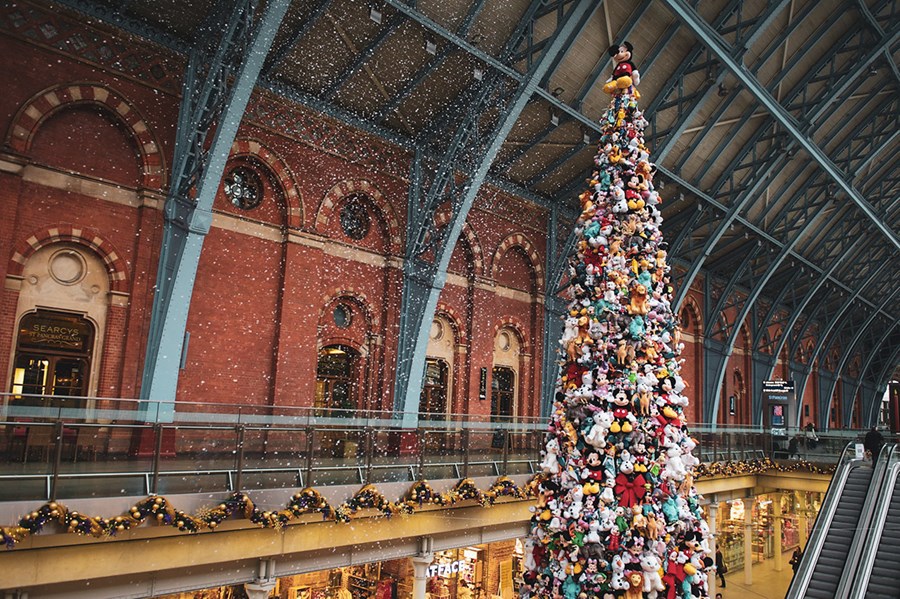 Oxfam supporter Sara Cox officially switched on the lights of our 2016 Cirque du Soleil Amaluna Christmas tree, followed by a breath-taking performance in the station by the cast of the critically-acclaimed production.

This festive season, the Amaluna Christmas tree raised awareness and money for Oxfam's women's rights campaigning. The 12-meter-high tree includes Amaluna's famous Water Bowl at its centre, and featured moving underwater projections of the cast and acts from the show.

Throughout the festive season, St. Pancras shoppers spending £50 or more in stores and at restaurants had the opportunity to receive a 20% discount on tickets to see Amaluna. 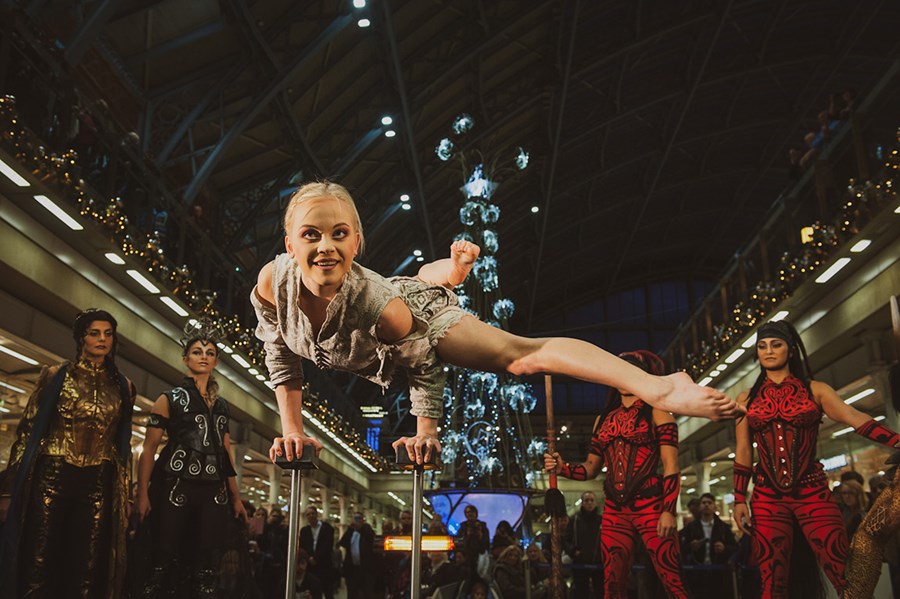 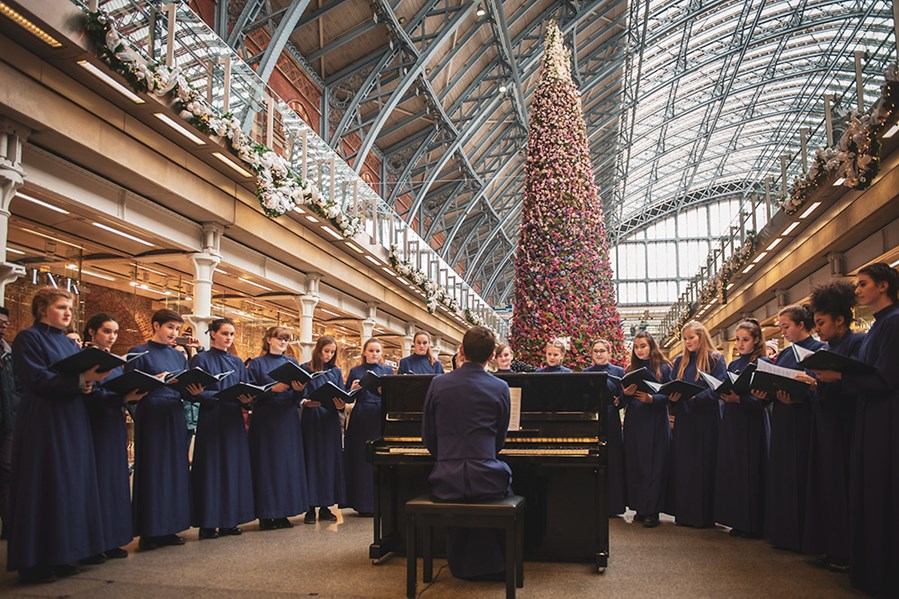 Made from over 15,000 flowers and taking 1,151 expert man hours to bring the unique design to life, the floral tree certainly brought a festive flourish to the station.

For 2018, we partnered up with Tiffany & Co. to unveil our first scented Christmas tree and fragrance shop in the heart of the station's Arcade, offering a touch of sparkle, sophistication and magic for the holiday season. 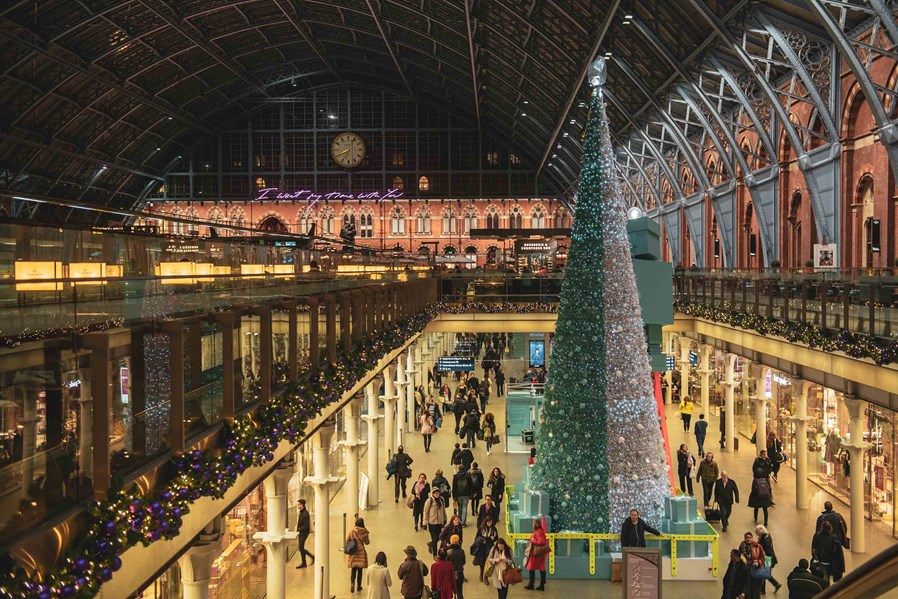 The tree stood at a magnificent 43-foot and had over 1,800 decorations. The sparkling floral scent of Tiffany's Signature Eau de Parfum fragrance diffused from the tree at key intervals each day, creating a unique immersive sensorial experience for holiday shoppers.

Last year we teamed up with perfume and beauty brand Lancôme to unveil the station's 2019 sparkling festive installation, inspired by Paris’ most iconic landmark - The Eiffel Tower.

The magnifique 36-foot installation embodied the elegance and cheerful spirit of the world’s largest French beauty brand, brightening up the station with Lancôme’s signature pink pantone. The breath-taking creation was adorned with over 1,500 bottles of the brand’s signature fragrance, La Vie Est Belle; a scent that captures free-spirited and fulfilled femininity, perfectly embodied by Lancôme’s Global Ambassador and face of the fragrance, Julia Roberts.

The Lancôme Christmas installation also brought the magic of Paris to the station with a magical light show – mirroring the original tower’s iconic display. The show, with over 1,300 flashing LED lights, was visible almost 600 times during the festive season.