There’s no place like St. Pancras as the station celebrates new Judy Garland biopic with a special surprise performance from the Rock Choir. The world’s largest contemporary choir delighted the station’s commuters with a performance of some of the Hollywood star’s most popular songs.

Bringing some razzle dazzle to the station’s main concourse, 30 members of the choir gathered under the station’s iconic roof to perform two of the Hollywood star’s most loved songs, ‘Over the Rainbow’ and ‘Get Happy’, which they also performed at the star-studded movie premiere on Monday 30th September. 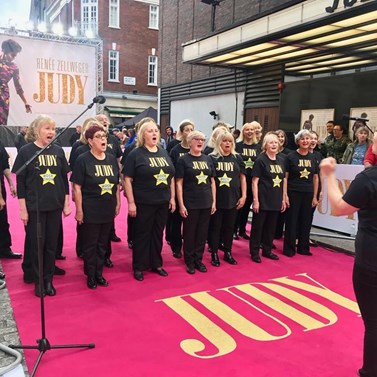 In recent years, the Rock Choir has developed a fantastic reputation for its unique style and the feel-good experience that it gives its members. It supports hundreds of local communities and raises money for numerous charities through performances and events.