Fall in love with a new book

There’s nothing like getting lost in a real pager-turner, here’s what Hatchards' recommend for you to dive into over the most romantic time of year…

There’s nothing like getting lost in a real pager-turner, here’s what Hatchard's recommends for you to dive into over the most romantic time of year…

It Ends With Us by Colleen Hoover

Described as a 'bold and deeply passionate novel', It Ends With Us isn't your typical love story. If you've seen the trending TikTok reviews, you will not be surprised to hear that you will find your heart breaking but smiling through the tears by the end, and of course saying 'Okay. Just one more page' over and over.

The Love Hypothesis by Ali Hazelwood

Ph.D. candidate, Olive Smith, doesn’t believe in lasting relationships, but as her best friend does, Olive panics and kisses the first man she sees - Adam Carlsen. It doesn't take long for Olive to discovers that the only thing more complicated than a hypothesis on love is putting her own heart under the microscope.

Me Before You by Jojo Moyes

If you were a fan of John Greens 'A Fault in Our Stars', why not try romantic novel, Me Before You. The tale of two people that lead two completely different lives, until love gave them everything to loose. This novel showcases a balance between heartbreak and hope, with some humour.

The Song Of Achilles by Madeline Miller

Winner of the 2012 Orange Prize (now The Women’s Prize for Fiction), The Song of Achilles is a moving retelling of the Trogan War of imagination, a devasting love story and battle between gods and kings, immortal fame and human heart.

If you're a fan of an updated classic, this could be the romantic read for you!

Love and Friendship by Jane Austin

We couldn't have a romantic recommendations list without including a classic by Jane Austin! While the 'obvious' read might be 'Pride and Prejudice' or 'Sense and Sensibility', we have selected 'Love and Friendship' for an alternative.

A 14 year old Austen parodies the sentimental novels of the time. Love and Friendship is written as a series of letters from Laura to a much younger Marianne (her friend Isabel's daughter) to warn the young Marianne about the dangers of falling in love.

Also, what a pretty book to add to your collection!

When America's First Son has an altercation with the Prince of Wales, U.S./British relations take a turn for the worse. That is until the families devise a plan for damage control. What at first begins as a fake, Instagramable friendship grows deeper as Alex finds himself falling into a secret romance with Henry and begs the question: Can love save the world after all? 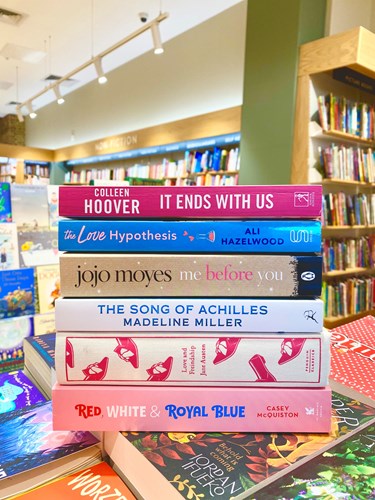